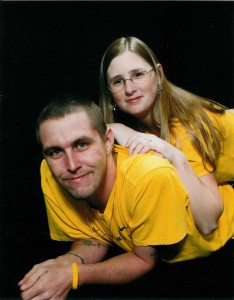 Josh lives in Rocky Mount, Virginia (Franklin County) with his wife, Amanda, and their 2 boys, Kobie and Kolbrin.

Josh grew up in Botetourt County, Virginia living with his grandparents, Bobby and Dixie. He attended Lord Botetourt High School, as well as ECPI technical college in Roanoke, and the University of Phoenix. Both majoring in Information Technology networking & security management. He enjoys chatting online with his friends, doing graphic art design, web design, and tinkering with gadgets. He also enjoys spending time with his family and doing things with them. His favorite food is hamburgers!

Josh was diagnosed with stage 3 testicular cancer at the beginning of May, 2008. He underwent chemotherapy from the late Dr. Gerald Shertz at Blue Ridge Cancer Care. The cancer had spread to Joshes spleen, liver, and both lungs. Dr. Shertz had sent Josh to Indiana University to be treated there by the oncologist at IU. They wanted to monitor Joshes tumors to see how they were reacting to the tumors.

In November of 2008, Josh found out that the cancer had spread to his brain. He had an inch and a half brain tumor. He underwent emergency surgery to have it removed. The surgery was performed by Dr. Harron from Carilion. There were no complications with the surgery what-so-ever.